The earth moved, an aperture in time.
Tectonic plates shifted within her soul
left behind an open space,
a void within her life.

She stood above where he lie.
Moist grass licked her ankle bones,
feet planted firmly as she stared down,
eyes a spiral, boring deep and deeper still.

And when the summer storm came
she gently lowered herself,
a prostrate form upon the mound,
to protect him from the pelting rain.

She imagined his shape beneath hers,
tucked her arms close in beneath her chest.
Face resting upon the stone
she felt the granite, cool upon her cheek.

I love you always she whispered.
And lying still among the tombs
lying with him once again,
she felt his love within her heart.

Hanks of yarn wound into balls,
worked inch by inch into comforting garb.
Orb turned over and over,
lengths of colors pulled and stretched.

Fingers weave and eyes watch carefully
as a painstakingly beautiful pattern appears.
Would that love be so carefully wrought
upon this orb we call home.

They sit quietly side by side,
purple veined hands, silver grey hair.

Slight puffs escape their lips,
the sound of dozing love.

Written for Tuesday Poetics at dVerse, the virtual pub for poets. Today Walt’s prompt asks us to write about the sounds of love. Stop by to see the prompt and read other posts on this subject!

Hand in hand, we explored the ports of call: Cartagena, Puntarenas, Puerto Quetzal, Puerta Vallarta, Cabo San Lucas. The cruise of a life-time through the Panama Canal in its 100th anniversary year.

We extended our trip by two days in the final port, San Diego. Our last dinner began at dusk and ended in the dark. Sitting in a pedicab with tiny white lights round its surrey, we wended our way down the esplanade, beside city trolley tracks. Music from the driver’s battered boom box played romantic songs. And then my husband’s voice surprised me: An extra twenty bucks if you play The Time of My Life! And so the surrey stopped and we danced in the night. One year after almost losing the love of my life, I was dipping, swaying, laughing and twirling in his arms. Two lovers having the time of their lives. Thankful for every day.

Written for Haibun Monday at dVerse where we’re asked to write about a romantic moment. Prose should not be fiction (it’s not), followed by a traditional haiku (nature based with a cutting pivot in the second line). Video was taken by our driver – you can see the train/trolley go by near the end.  Photo below is earlier that day, The Kiss — statue of the famous photo taken at the close of World War II.  That’s us at the bottom of the statue 🙂  Statue is near the USS Midway — which you can tour in San Diego. 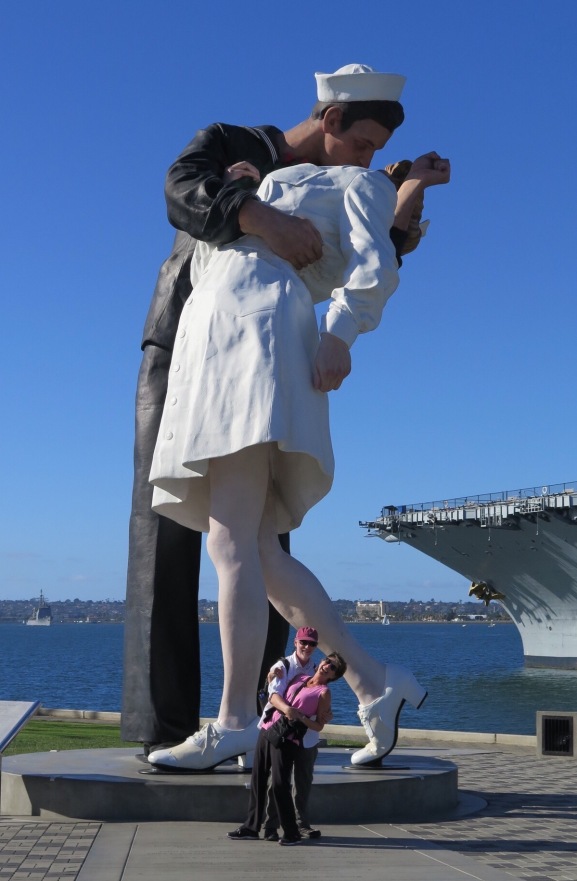 …as we round the bend.
Steps less sure, pace more slow
hand in hand, loving still,
leaning toward the end.

Sharing at dVerse today — Grace is hosting Open Link Night.
Come on over and see what others are sharing!

Friendly foursome of youth
we lived near Mississippi shores
dancing with fire flies,
oblivious to time.

Fifty years of days gone by
we meet again,
laughter etched in faces lined,
steps slowed by trials of time.

Old friends. Young hearts. Augustana College is located in Rock Island, Illinois — along the shores of the mighty Mississippi – our alma mater.

It’s Poetic Tuesday at dVerse and  Mish asks us to become songwriters today, remembering to “lighten up our phrases to make them singable” — use repetition, create a refrain.  I’ll leave you to make up the tune! 🙂  Photo from pixabay.com

Double bed
two crowded,
they shifted to a king.
Never to touch again.

She said double or nothing,
hoping to return
to their double standard
sheets and colorful duvet.

He walked out the door,
double helix done.
One line veered off the path
unraveled, broken, gone.

Doubles life, double downed.
Left alone she was.
No one else.
None, no one but one.

NaPoWriMo Day 15: a poem that incorporates the idea of doubles.

Join 1,903 other subscribers
Follow lillian the home poet on WordPress.com