The infamous Flowers Act,
high-steppers of vaudeville fame.
Two performances a day
forty-two weeks a year,
those days before the movies talked.

Flunkie acts started shows,
as rows began to fill.
Maybelle and her off-key dogs?
Surefire way to empty the house.
The best was always in-between.

Operatic divas with mighty breasts
Mr. Visser and his singing duck
acrobats performing impossible knots
and in the midst of all this prime time,
René strutted onto the stage.

Deflowered early in her career
she’d made the best of it.
Twirled baby Rosebud overhead
tapping away to the newest tune,
audience clapping with glee.

Child-stars grow as years move on,
mamas trying to keep them young.
Highlight move of the Flowers act
dancing with Rosey held overhead,
harder and harder to do with a smile.

The nefarious night of 1929.
Outdoor billboards proclaimed,
See Our Flowers Tap To Delight.
Spotlights cued, the band played
and curtains rose to a barren stage.

The organ played and the audience cheered.
High steppers fanned across the stage,
kicking their way into Billboard fame.
Including one with a rosey attitude,
because her time had finally come. 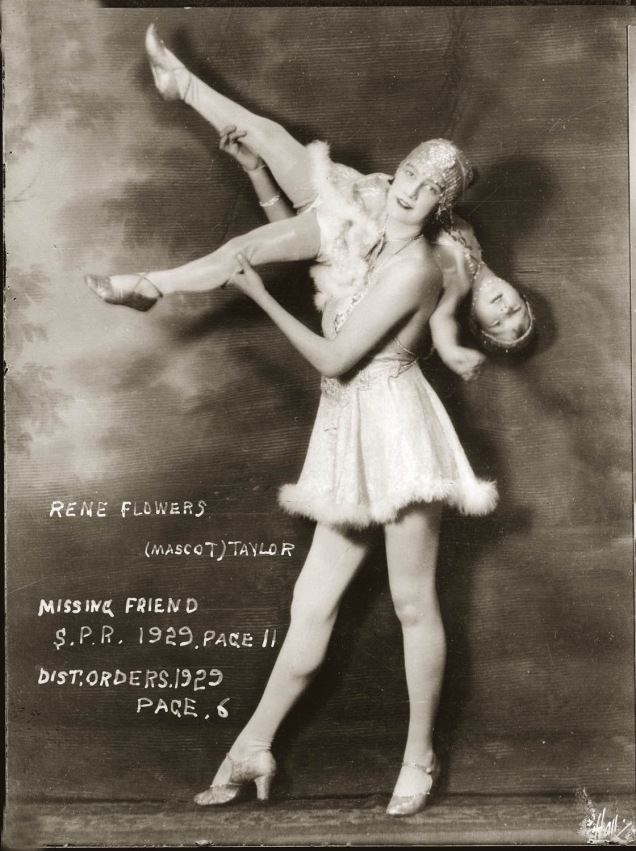 It’s Tuesday’s Poetics at dVerse, the virtual pub for poets. Today I’m hosting, asking folks to write a poem motivated by mugshots from the 1920s (all in public domain). Folks can use their imagination and take their post anywhere the photo inspires, as long as they include one of the photos, all of which can be found here. I did some research on vaudeville and Radio City Music Hall. Vaudeville acts were arranged as mentioned in stanza two. There actually was a very popular vaudeville act, Gus Visser and his singing duck! Radio City Music Hall did open in 1932. All else….your guess is as good as mine! Pub opens at 3 PM Boston time.  Come on over and enjoy a mug!