She’d left him years ago,
but each day she came closer.
Porcelain skin, barely blushed cheeks
velvet brown eyes as he remembered them,
brimming love.

Until at last he smells her scent,
roses permeate his soul.
One last rose lovingly placed
centered within her crowning hair,
her essence complete.

And so he sleeps his final sleep
as gulls squall in the distance
and waves create his elegy.
His bluing lips smile in repose,
knowing she is nearby.

I am hosting at dVerse today, the virtual pub for poets around the globe. I’m delighted to have reconnected with artist Catrin Welz-Stein who is graciously allowing us to select one of four provided images as motivation for our poetic creations today. I’ve chosen the beautiful image above – it was hard to choose as all four are magical in my opinion. You can find more of her work here: Catrin Welz-Stein, Join us today to see art-inspired poetry – what is called ekphrastic poetry.

Some say
art attempts to mimic life
represent what is.
Sunrise, sunset, shifting clouds.
Feelings within, so real and so deep.
Elation, grief, giddiness, disbelief.

Innumerable mediums
used to model, massage,
meld, shape,
perhaps punctuate.
To express what is
what was or what could be.

Juxtaposers of the real
and the contrived.
Can we identify the essence,
make that available to another?
Or does the essence change
by the time or while we try?

That moment of utter despair.
Does it curdle
as we convey its circumstances,
its shredding of our soul?
Can we freeze reality
in paint, or clay; words or tale?

Or is all art
but a flicker of perception,
the artist’s, the essence,
and the observers as well.
Never static,
though made apparently so. 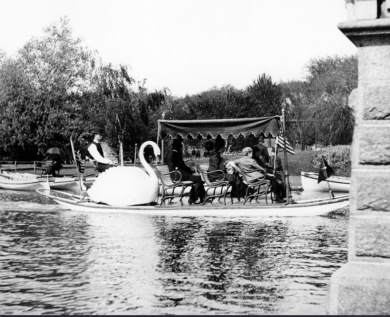 Poem was motivated by a walk in Boston’s Public Gardens last week, when I took the first photo of the beautiful and graceful swans with the Swan Boats in the background.
History: The Swan Boats have been in operation since they were created by Robert Paget in 1877.  He was inspired to make them after seeing Lohengrin, based on a German tale where a character rides on a swan. In 1877 the bicycle was gaining in popularity so he created the swan boat using a catamaran with benches, powered by pedaling, similar to pedaling a bike. The photo on the right is from the late 1800s. Interesting to note: the swan boats are still operated by the Paget family….and still have the original design. Tourists flock to ride them….and my grandchildren love them! 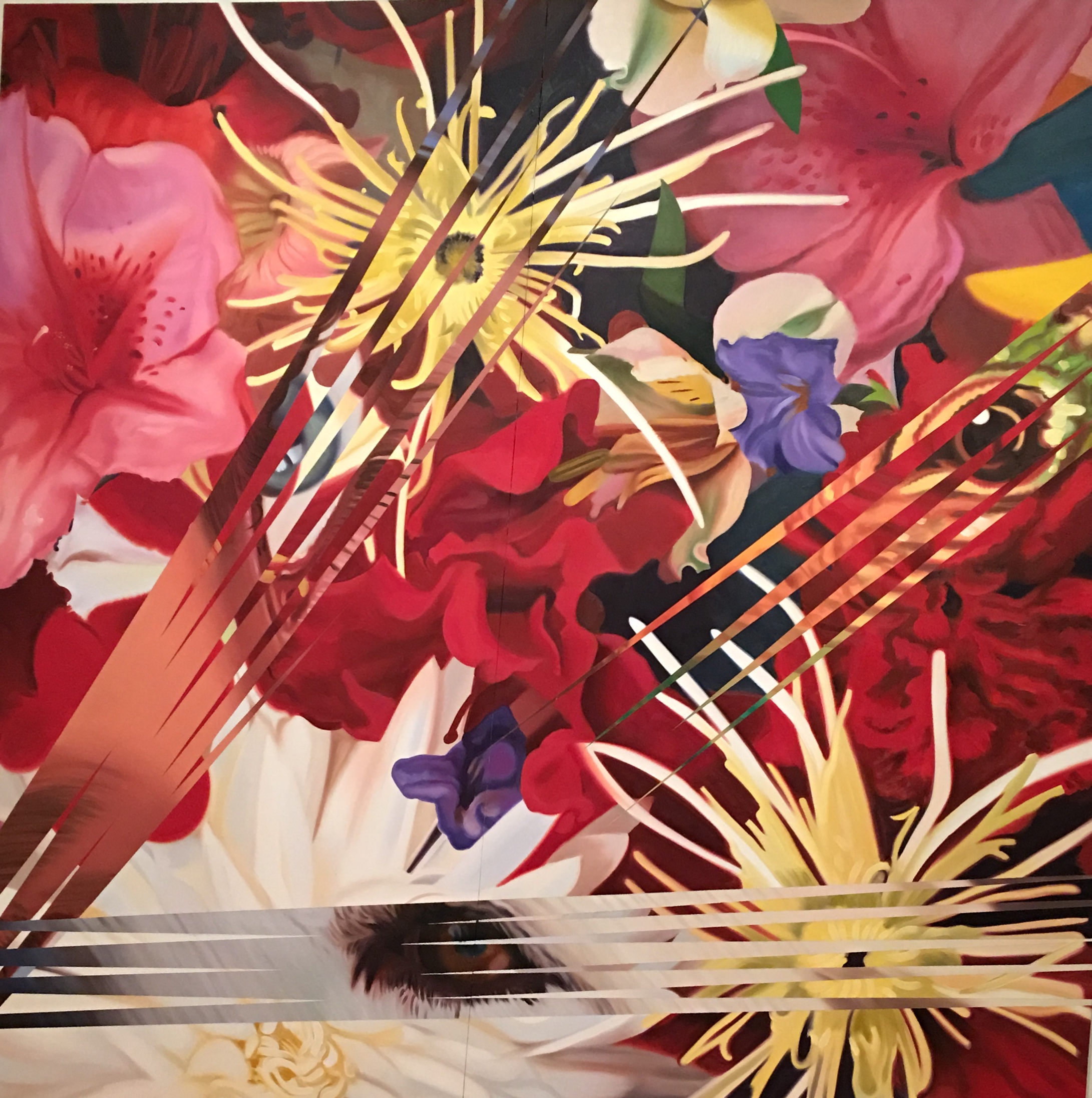 dear totto,
georgia on my mind.

middle name unknown to most.
artistry praised by many,
alive beyond your death.
i remain, 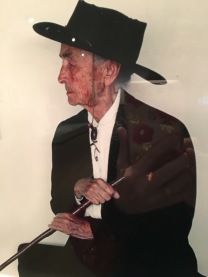 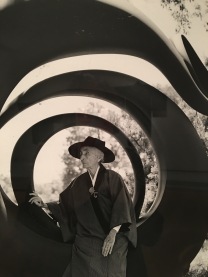 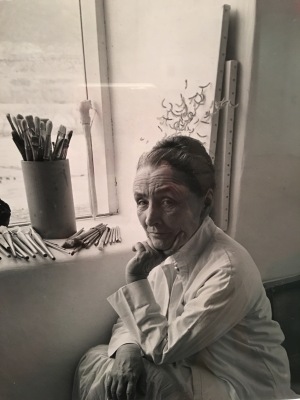 Written for dVerse, the virtual pub for poets, where today, Bjorn asks us to write a letter poem. S/he is inspired by my visit yesterday to the Peabody Essex Museum in Salem, MA to see a Georgeia O’Keefe exhibit. Photos above all appeared in the exhibit, in addition, to one erotic nude photo of her (taken by Stieglitz), behind a very sheer curtain. Her middle name was Totto. These are all photos of her. You may be familiar with her abstract depictions of brightly painted flowers and leaves. Feminists believed her red canna flower series were abstract representations of famale genitalia, which she adamantly denied. She is also famous for her landscapes of the Southwest. Post written in all lower case, to exemplify her simplistic clothing choices and style.

She moved to New York City and married Stieglitz, a famous photographer who would take over 300 photos of her. Midway through their marriage, she began to travel between New York City and New Mexico. When Stieglitz died in 1946, she moved soon thereafter, permanently, to New Mexico. She was also good friends with the famous American photographer, Ansell Adams. I would love some day, to visit the Georgia O’Keefe museum there.

He lost his head that day.
Disappeared into green lush woods,
the gardens of his mind.
Some nurturing space of his own design
between the borders of insanity and reason.

City engineer.
Day in and day out
he plotted and planned.
Highways, byways
throughways and roundabouts.
Traffic control,
exit ramps and entry lanes.
Cement road-snakes for autopilot mannequins.
Metal caskets on wheels,
rushing here and there and everywhere.

Head full, he just stopped.
Could not cope.
Could not recognize
patterns, directions,
escape routes from today
into the morrows.

And so he stared,
that morning at his desk.
Never moved.
Retreated into a nowhere,
his forest of nothingness. 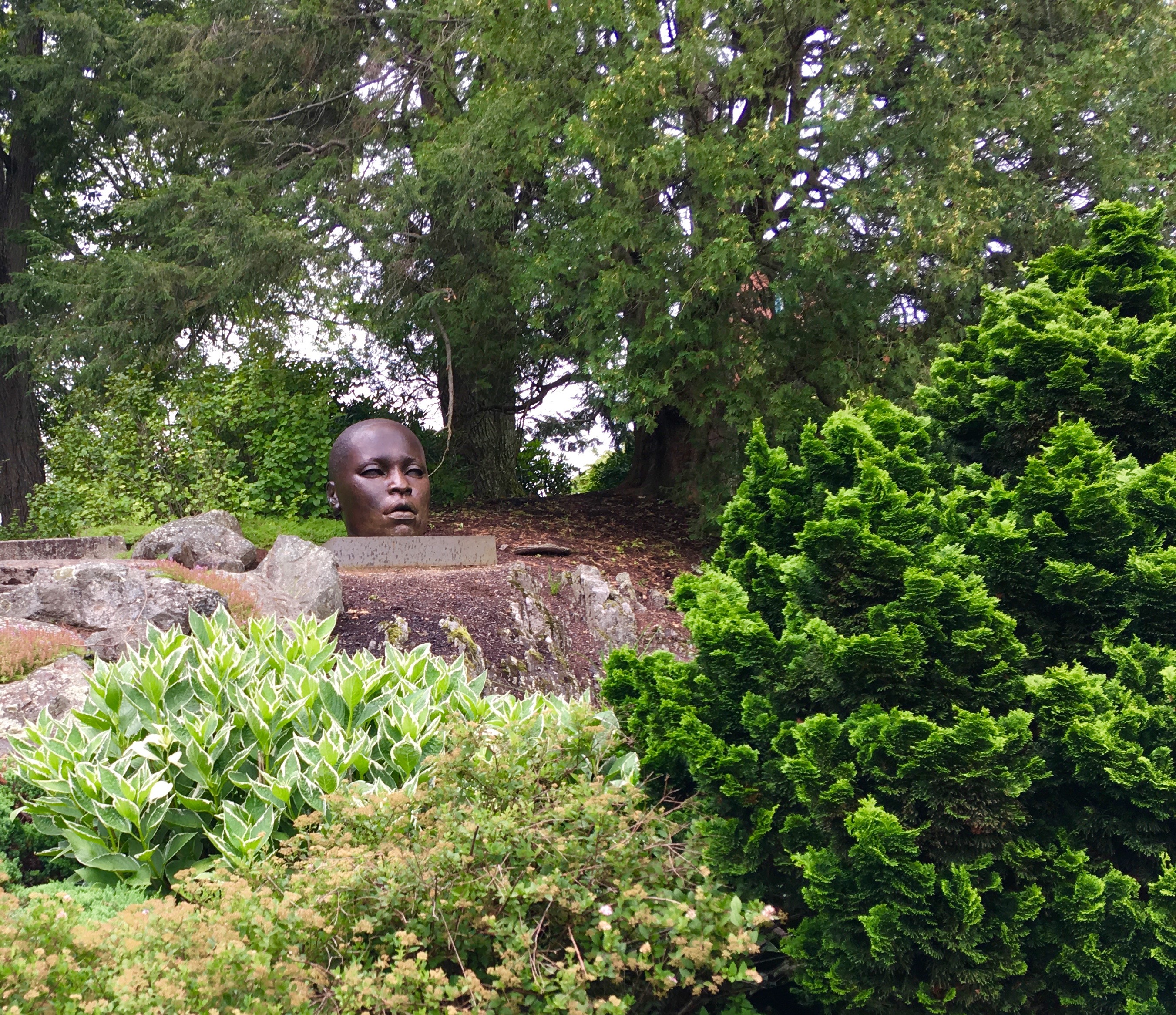 Written for Tuesday Poetics at dVerse, the virtual pub for poets. Today, Grace is hosting and asks us to use the word “border” within the poem or in the title. And, extra credit if we write somehow about a mental state.
Sculptur is in the de Cordova Sculpture Park and Museum in Lincoln Massachusetts. Eternal Presence by John Wilson, 1987; a study for the full size, seven-foot tall sculpture which stands outside the National Center for Afro-American Artists in Boston.

Our long planned summer holiday became a retreat from the turmoil of hatred and anger flooding the news. In five days we traveled to six art galleries in Western Massachusetts. We deliberately drove the back roads, immersing ourselves in rolling hills, farmsteads, streams and wildflowers. We noted “Thickly Populated” signs announcing upcoming small towns.

Our first stop was the Mass MOCA located in rehabbed 19th century factory buildings. Football field-sized Building 5 houses Nick Cave’s Until installation. 16,000 spinners hang from ceiling to floor. Walking through them was magical. Sol Lewitt’s colorful graphic walls made us smile. Most fun, was the Eric Carle Museum of Picture Art. Squealing children were right at home in this cheerful place. We laughed in delight to see The Very Hungry Caterpillar original art work. We walked in quiet contemplation through the Museum of Russian Icons.  Beautiful paintings from the 17th, 18th, and 19th centuries. In hushed amazement we realized, none of this exquisite art is signed – the anonymity of artists intent on reverence rather than aggrandizement of self. Our last day, we wandered the deCordova Sculpture Park and Museum, enjoying the juxtaposition of natural beauty and the possibilities of humankind’s creative genius. 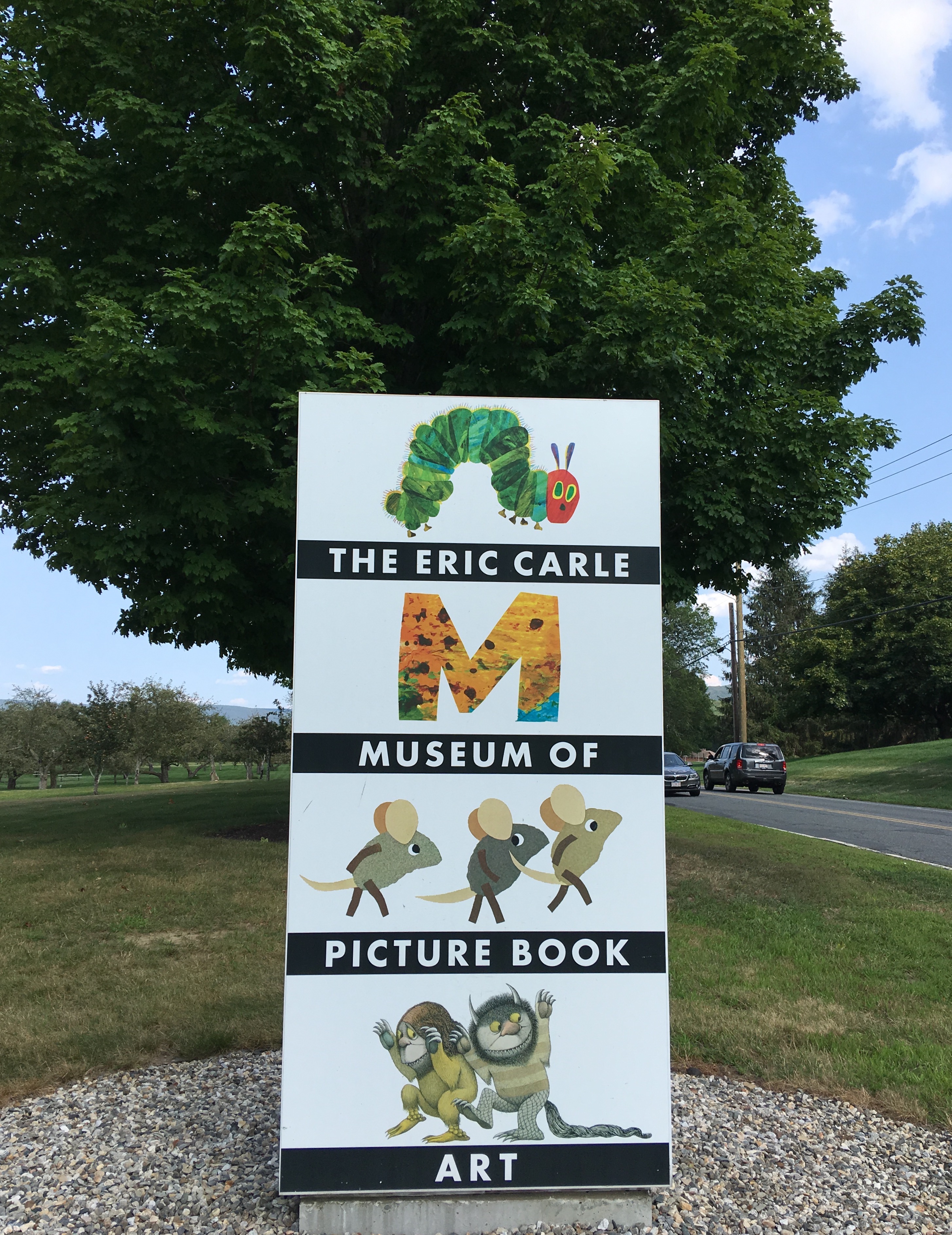 It’s Haibun Monday at dVerse, the virtual pub for poets. Toni asks us to write about a summer vacation, either recent or past. Haibun: 2 or 3 tight paragraphs that cannot be fiction, followed by a haiku that must have a nature theme. Pub opens at 3 PM Boston time.

We visited Western Mass. last week. Origins of the artwork pictured above are all mentioned in the haibun except for the last photo which is the sculpture Humming by Jaume Plensa. Locations: Massachusetts Museum of Contemporary Art is in North Adams; Eric Carle Museum of Picture Book Art is in Amherst; Museum of Russian Icons is in Clinton; deCordova Museum and Sculpture Park is in Lincoln. We also visited the Clark Art Institute and Williams College Museum of Art in Williamstown — both were exceptional as well.

Daytime, meandering through the Peabody Essex Museum. I stopped to stand and look at a painting on the wall. The looking turned to gazing. Time shifted and everything disappeared. I was under the stars, the shifting clouds. Felt night’s cool air upon my face. Marveled at the moon’s path upon glistening sea. This magical night enveloped me. There was no one else. Nowhere else. Until a tap upon my shoulder made me turn my head.

Double posting today! (see also Wishful Thinking) Written for dVerse haibun Monday where Toni, the maven of haibuns, asks us to write about the night sky. A haibun consists of a short, concise paragraph of prose that cannot be fiction, followed by a haiku. PHOTO taken at the Peabody Essex Museum in Salem, MA:  Moonlight, created in 1892, oil on canvas. Painted by impressionist Childe Hassam (1859 – 1935). The scene is from Appledore Island, the largest of the Isles of Shoals off the coast of New Hampshire, where he spent many a summer at the cottage of Celia Thaxter.