Early fall breeze wisps over me
touches my brow, my nose,
swirls ’round the room.
Plastic window blinds plink a tune.

Lying next to me, this year’s fourth night,
your fingers curve round mine.
Your lips puff out some snoozing air
and I smile.

Eye lids heavy,
I imagine us young again.
Dancing in the stars
riding on moonbeam tails,
and I grin myself to sleep.

Photo taken in Provincetown from our deck, BC (before Covid) in 2019. This year we are hunkered down, still enjoying the ocean and beautiful scenes similar to this, but maintaining our Covid-bubble. We are not walking in to town to galleries, restaurants, and shops. Here’s hoping next year will find us on raucous Commercial street again!

Standing in front of the sea,
she smiles with moon-kissed lips.
I immerse myself,
deeper and deeper still.
Explore her nautilus curves.
Ebb and flow within her wake,
then lie still
as darkness gives way to light
and dawn awakens me.

I lie stilled on deserted beach.
Low tide surrounds me,
as if the ocean bared its soul.
Oh rapturous sleep, I question thee.
Was she real, this goddess of the night?
Or was she but a siren
escaped from far-off craggy coast?
Tears flow from my eyes
staring up at blushing sky.

Spent am I,
splayed out on moist and rippled sand.
And then my fingers feel . . . what?
Something smooth and cool to touch.
A nautilus.
I stare at it in wonder.
Then slowly, lowered to my lips,
my mouth upon its curved edge
I whisper hoarsely,
I shall return tonight, my love.
You are my destiny.

We romantics ~
five decades joined,
content to lie still together.
So much love
as fingertips touch fingertips,
lips linger a bit for goodnight kiss.
My wish as eyes slowly droop,
may we rise together in the morrow
joyful for another day. 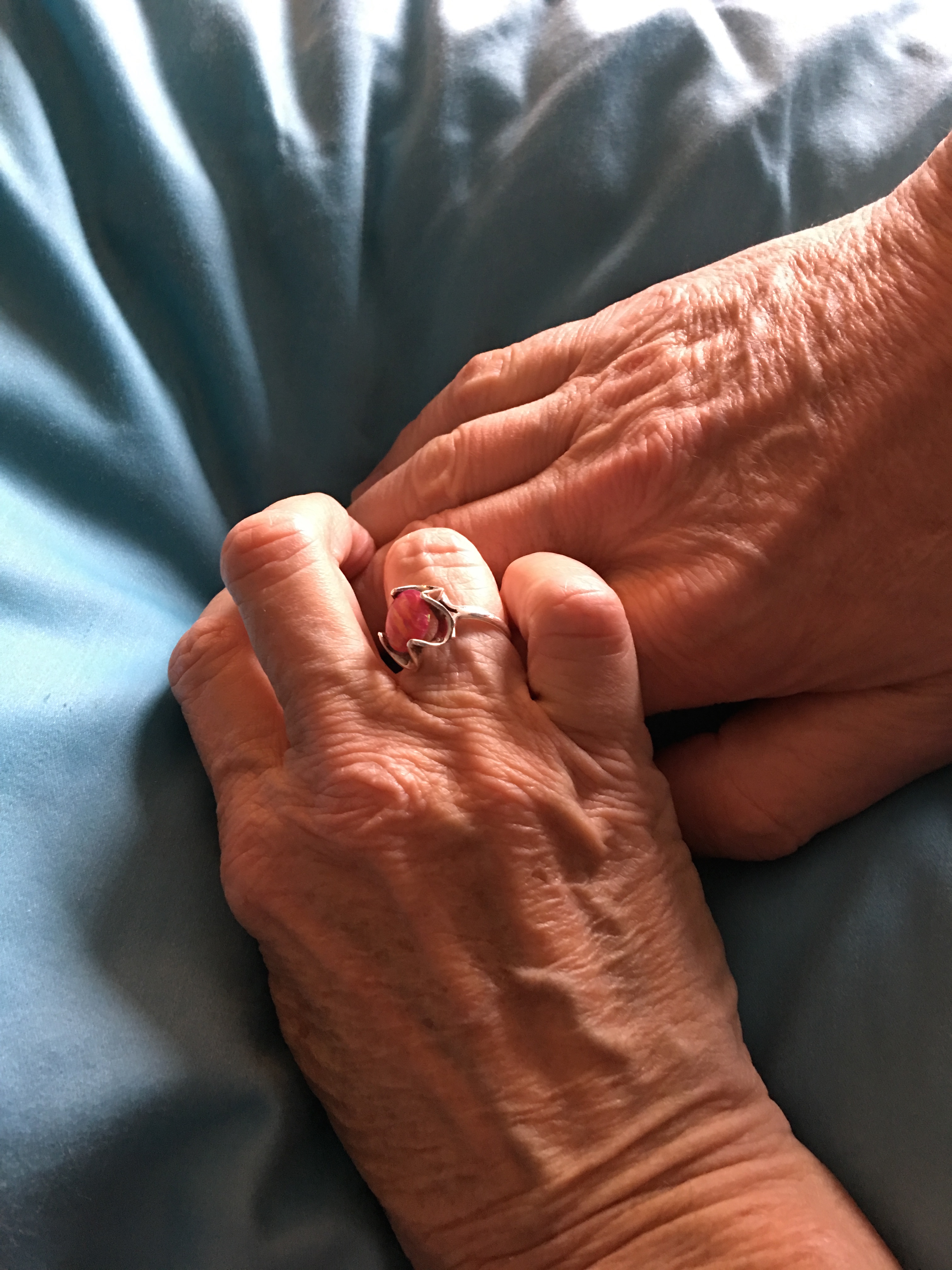 Saturday, October 19th, 2013. A beautiful crisp fall day. Our condominium complex drive was cheerfully planted with bright cushion mums. Little did we know in July 1997, when we moved from Iowa to Boston, how important that housing choice and this date would become.

Our condominium high rise building is across the street from side entrances to Massachusetts General Hospital, one of the premiere healthcare facilities in the United States. As some of you already know, on Monday, October 14th, 2013, my husband suffered a six-minute cardiac arrest in front of our building. He was rushed by ambulance to MGH; put into an induced coma on life support. They lowered his body temperature and gave him a paralytic drug to keep him absolutely still, trying to minimize brain damage.

On Tuesday evening, October 15th, his body temperature was slowly raised as he was weaned from the paralytic drug. We were told he may or may not wake up. If he did, it would not be for at least 72 hours and, in all likelihood, he would not be himself. Against all odds, he woke up at 9 PM that night. Wednesday morning October 16th, he was taken off life support, intubation tube removed, and he correctly answered all questions posed to him by a neurologist. On Thursday, October 17th, he was moved to the cardiac step-down unit, out of intensive care. Friday, October 18th, he had a defibrillator implanted. Saturday, October 19th, he was released from the hospital. And in one shining moment, with our son and daughter on either side of him, he walked back home. Back across the street and back into our lives.

Photo is a bit blurry as I was crying tears of joy when I took it.
Written for Haibun Monday at dVerse, the virtual pub for poets where today I’m hosting and asking folks to write about one shining moment in their lives.

Fifty years . . .
we’ve had the privilege of growing old together.
May there be many more.

Perk up!
So the path behind is longer
than the trail ahead.
Wild flowers still bloom,
ready for picking along the way.

No more reins to white knuckle.
The children are loose
reining in their own foals,
galloping in fields you planted,
tended many years ago.

Embrace your lover joyfully
as days and weeks slip by.
Love more deeply, gently, surely.
Expect to share the morrow gladly
as you kiss the night goodbye.

Written fordVerse, the virtual pub for poets, where Frank is tending bar, asking us to write a soliloquy poem today.  Photo from Pixabay.com

October 19, 2013. We walked across the street from Mass. General Hospital into a new life. My question: Is there always darkness before light? Night skies before the dawn. In utero before light at the end of the birth canal. Sleep before the alarm sounds. Death before new life.

Six minutes minus a heart beat. Thirty-six hours of induced comatose state. You suspended somewhere; eyes shut, machines whirring. Me existing in light which felt like the darkest of times.

You returned to us and the morning sun. Five days later, we walked home. Six years later, we are together still. Thankful for every day.

Written for dVerse, the virtual pub for poets. Bjorn is hosting Haibun Monday and asks us to write about new beginnings. Haibun: 2 to 3 tight paragraphs of prose (must be true) followed by a haiku. The condominium building we live in is actually located directly across from the main campus of Massachusetts General Hospital.

let us lie together,
dreaming deeply
until we find an opalescent
magically luminescent forest.
Let us love
beside immortal sprites and spirits,
share dew drop kisses
amongst shimmering leaves.
Wouldst this be our shared lullaby,
that we might ignore the dawn
when reality beckons.

Written for Quadrille Monday at dVerse, the virtual pub for poets where today De asks us to use the word “spirit” (or a form of the word) within our quadrille (a poem of exactly 44 words, sans title). Image from Pixabay.com

I rise to a new day not yet dawned,
leaving you to your dreams.

In the last filaments of darkness
I understand again.

You are the constant in my life,
you light my way.

labeled Taurus by sun,
emerald green by hue.
Fire and earth,
my elements.
1947,
year of the pig.


All this I am told.
All this I read . . . and ignore.
You are my mirror.
In you, my reflection
has no labels,
no boundaries.


You release me,
you always have.
I suspect
you always will.
Stalwart, loving,
supportive, accepting.

Together,
two individuals
side by side,
in sync.
Two harmonious melodies
with unique time signatures.

Two strong vines,
you and I, intertwined.
We blossom sans labels,
sans categorizing systems.
We soar in harmony,
Zodiac be damned.

Amaya is hosting Tuesday Poetics at dVerse, the virtual pub for poets. She asks us to consider cosmology, the various systems that define us by elements, astrology, etc. Image is from a family album of geneology I am creating. That is my writing…and this is actually a page from my father’s desk calendar, ripped out the day I was born; laminated, and carried by him in his wallet until the day he died. He had another one from the day my brother was born. That small block printing “LILLIAN” below the calendar, is his handwriting. A draftsman, he always wrote in block print.