Namra, spinner of tales, weaved her way into his naivety. Vulnerable, unaware of her guile, he pledged his love, earthly possessions, and his soul. In dark of night, she promised nirvana whilst leading him to the place of angels. Unbeknownst to him, a destination not where spirits soar; rather where they stand in frozen state. Cold stone in the midst of searing heat. Those who dared to fly, minus forearms or bent with ravaged wings. Some forever with fingertip to lips, hushing final cries of hope. Angels, sentinels of death, where living bow their heads.

He followed, unaware that she is a collector. Unaware she lures the unsuspecting to a marble bed. Lies with them but for a moment until the aphrodisiac of her silken ways, overcomes their senses. Seers say his body awakened in the cold to emptiness. That he lies now through the ages, eyes open, awaiting her return. Unaware that silken threads forever lace round a rusted metal lock. A comfortless duvet of intricacy, barely moving in the languid breath of summer winds. He is forever unaware that she continually seeks new prey. Promising an ecstasy of love to rival the ages, but caring not for the soul. 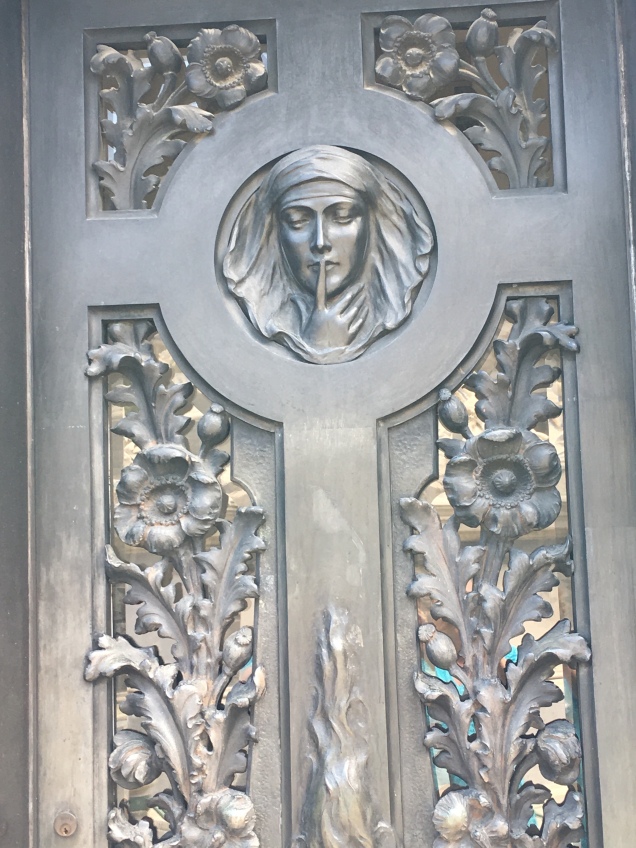 Photos from Recoleta, an amazing cemetery in Buenos Aires, where Evita is buried. We had a wonderful private tour of the city with Ceri of Buenos Tours, which culminated at Recoleta. A word of explanation: I’ve been on back-to-back cruises to South America and now heading to Antarctica, hence have not been able to post often (very limited internet access). I’m scheduling this so it will post for OLN. Consider this prose poetry.