Jack Spriggins,
I’m here to settle up.
I took yer cow some days past,
gave you beans to plant in exchange.
You said it’d be a good swap fer me
since I had young’uns to feed.

Well sir, the cow, she turned up dry
and the missus is still howlin’.
Neighbors down the road apiece
talkin’ about an oversized grave.
You buried a giant back here?
Shoveled it deep and high as can be.

I reckon this here’s the hill I’m lookin’ at,
and I can see, it’s paved with gold.
Best make good yer swap, Mr. Spriggins,
and share the wealth you got.
Else I predict yer goose is cooked
and you’ll take a fall from way up there.

And that new wife of yours named Jill?
I reckon she’ll come tumblin’ after.
I learned a long time ago,
stolen goods are not the way
to livin’ happily ever after. 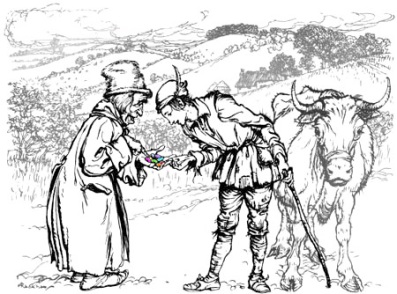 Originally written for NaPoWriMo’s day 21 prompt: a poem in the voice of a “lesser” character within a fairy tale. Rewritten for dVerse Open Link Night, where Victoria is tending bar. dVerse is a virtual pub for poets. Stop by to exchange ideas, post and read wonderful poetry!

EXPLANATION OF POEM: Jack and the Beanstalk is a famous English fairy tale originally written in 1734 as The Story of Jack Spriggins and the Enchanted Bean. Plot: Jack’s cow goes dry. On the way to sell her at market, he meets an old man who trades Jack some “magic beans” for his cow. Jack climbs the resultant beanstalk, finds a castle, a giant, a goose that lays golden eggs and a magic harp. He steals the wealth, is chased by the giant, axes the beanstalk and the giant falls dead to the earth. Jack and his mother live happily ever after.
There is also a reference here to the traditional 18th century English nursery rhyme:
Jack and Jill went up the hill
to fetch a pail of water.
Jack fell down and broke his crown
and Jill came tumbling after.

56 thoughts on “Jack and the Beanstalk revisited”