In 2005, we rented a vacation home on the Big Island. Our back yard included an ocean inlet to Champagne Pond where at low tide, we swam with glorious sea turtles.

Our most amazing adventure was a lava hike, climbing over fields of hardened basalt. Eventually we came upon fissures where hot lava pooled, spit, hissed, bubbled and oozed ever so slowly. Using flashlights on the return walk, lava glowed red-orange in the distance, as if a jack-o-lantern was lit across the horizon. We also hiked across a caldera, over “waves” of Pele’s hair. We found a small delicate fern peeking out of a crevice. Hawaiian breezes deposit plant life in nooks and crannies. Life reappears in the midst of desolation.

Pele’s anger erupted violently in 2018. Kilauea spewed plumes 12,000 to 30,000 feet high. Fissures burst open. Lava flows destroyed over 700 homes. Lagoon House: A Piece of Paradise, the vacation home so many people enjoyed over the years, was entombed in thirty feet of boiling lava, which eventually cooled to impenetrable basalt. As the owner wrote, the coastline is forever changed. I wonder, how long it will be before a single fern, and then a tree, and then a grove of trees take root. Will the memory of Pele’s reckoning disappear? Will humans be enticed to rebuild what was once called Leilani Estates – and is that even possible? 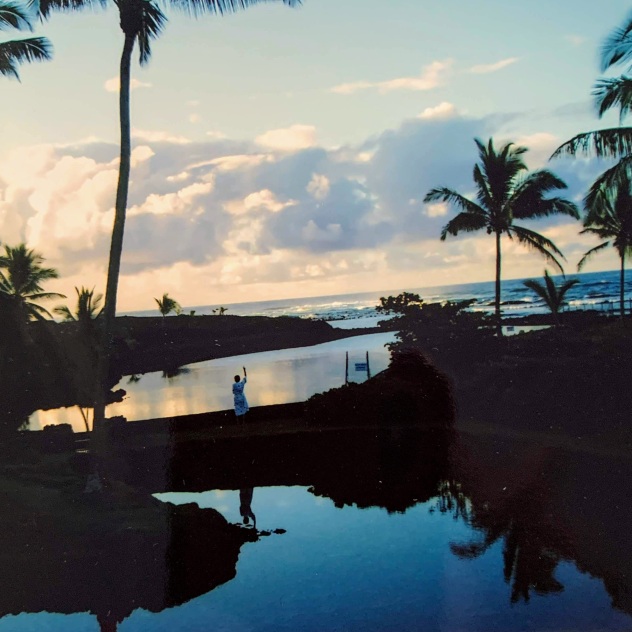 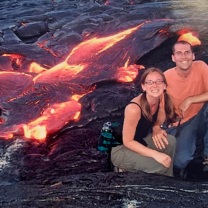 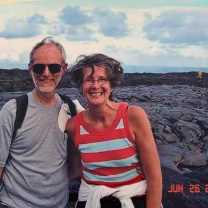 * Pele is the Hawaiian goddess of volcanoes.

Day 22: National Poetry Writing Month. Toads asks us to choose one of four given quotations to motivate our poem of any form.  I wrote a a haibun.

Photos from June 2005 trip with our children to Hawaii’s Big Island. Our guided lava hike across Kilauea, at the time, the longest continuously active volcano in the world, now seems ridiculously dangerous and foolish – given the horrific occurrence in December 2019 at New Zealand’s White Island.

In the first photo, I’m waving goodbye to the incredibly beautiful back yard at our vacation rental, the night before we returned home. Little did I know that 13+ years later, this scene would be nonexistent.

QUOTATION USED TO MOTIVATE POST:  “A fresh and vigorous weed, always renewed and renewing, it will cut its wondrous way through rubbish and rubble.” William Jay Smith

Join 1,880 other followers
Follow lillian the home poet on WordPress.com