We walked quietly through Hiroshima’s Peace Garden and the Peace Museum, listened closely to the story of Sadako Sasaki. She was two years old when Enola Gay flew over Hiroshima. Although she was outside the perimeter of its immediate target, she was diagnosed with leukemia seven years later.  An after-effect of the bomb’s widespread toxicity. During eight months of hospitalization, she folded 1,000 paper cranes, many made from small labels off her medicines. In Japanese culture, the crane is symbolic of good fortune and longevity. Sadako was nine when she died.

In 1958, people from all over the world, sent chains of 1,000 paper cranes, to the dedication of the Children’s Peace Memorial. It commemorates Sadako and the thousands of innocent children who died as a result of the atomic bomb. We smiled at the beauty, patterns and bright colors of paper cranes on display. We looked upward to the widespread arms of the beautiful statue.

The crane has come to represent peace and hope and today,is one of the most popular figures created in the art of origami. 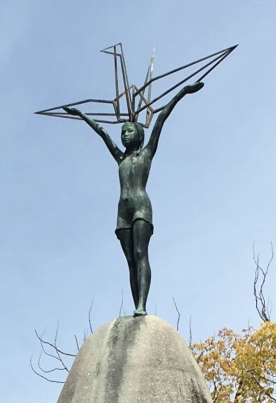 Written for dVerse, the virtual pub for poets, where Frank asks us to write a “haibun to commemorate Hiroshima…to focus not on despair of nuclear holocaust, but on hope born of rising from the ashes. ”  Photos are from our recent visit to Hiroshima: the colorful display of paper cranes; the beautiful Children’s Peace Memorial Statue; paper crane chains I made that now hang in the window of my study; and a photo of me with Kenji. He was an exchange student from Japan in my senior year of high school, 1965. I had not seen him since then and was so excited to reconnect in Japan. He gave me the beautiful origami paper I used to make the cranes. A very special trip indeed.
Reason for title: On August 6, at 8:16 a.m. Japanese time, the world’s first atomic bomb was dropped on Hiroshima. The city holds a Peace Memorial Ceremony each August 6, to console the victims of the atomic bombs and to pray for the realization of lasting world peace.  Sadako and the Thousand Paper Cranes is a wonderful children’s historical novel written by Eleanor Coerr, published in 1977.
Haibun: A Japanese form of poetry that includes 2 or 3 succinct paragraphs of prose followed by a traditional haiku.

27 thoughts on “For Tomorrow”