Hear ye, hear ye!
Listen my friends and ye shall learn
of the accolades so well earned
by one auspicious founding city,
bordered by the sea.

Now I’m quite certain,
there are many more,
all of which burnish
that proverbial record book.
But do let me share
one most unusual first,
not oft discussed
amongst delicate Brahmin Bostonians.

Taking a birds’ eye view, as they say,
of Boston’s colorful history,
well beyond its revolutionary ties.

There in grainy black and white
the Boston Beaneaters baseball team
stands tall beside and behind
the New York Giants team of the day.

Look closely and ye shall see
Charles “old Hoss” Radbourn
leaning in, well ahead of his time,
Boston-proud that long-ago day.

Now one can theorize
and I generally do,
this could mark
another auspicious first.

One raised finger, the first of many
shared over years to come,
between Boston and New York.
Long before the Babe walked out! 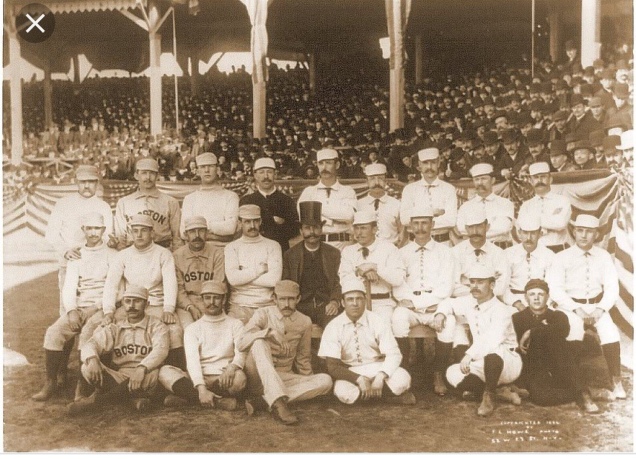 Written for Tuesday’s Poetics at dVerse, the virtual pub for poets, where we’re asked to write about a theory, or use the word “theory” in a poem, or theorize within a poem. Information for this post is documented at https://www.chaostrophic.com/heres-first-known-picture-someone-flipping-bird/   Old Hoss is far left, back row. Caveat: some have since said he is holding a cigar…but others point to later pictures of him flipping the bird on other occasions as well!

Join 1,905 other subscribers
Follow lillian the home poet on WordPress.com