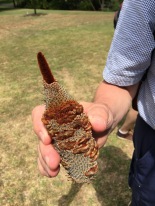 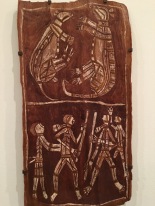 A Quadrille (poem of 44 words) using the word “scar” for dVerse where De is tending bar at this virtual pub for poets today. Photos are from our recent trip to Australia and New Zealand. In New Zealand, Europeans came to settle and discovered the Maori people — they were of Polynesian descent. Treaties were signed that ultimately displaced the Maori. However, in recent years New Zealand has done much to rectify the situation including a formal apology, declaring English and Maori as the two official languages of NZ, giving back some key lands, having both languages taught in the first years of school. There are Maori television stations. The video is of a beautiful Maori dance on the land, given back to the Maori’s, where the original treaties were signed. A beautiful museum just opened there this year.

Second set of pictures are from an Aboriginal tour we took of the Botanical Gardens in Sydney. This man is Aboriginal (mixed marriage) and showed us many of the plants and trees used by the Aboriginee for food and shelter, and explained their difficult history. Because Aboriginees no longer have easy access to their natural foods of years ago, they now eat “normal” food and their bodies have never adjusted…the average age of an Aboriginal male is just 65. Kidney disease and diabetes are rampant in the population. The artwork is some from the garden and one bark drawing from a beautiful display at the New South Wales Art Gallery. The Aboriginees have not fared as well as the Maori in New Zealand.

And of course, the wonded knee reference is to the Massacre at Wounded Knee in 1890 when US federal troops killed 150+ native American Indians. In the U.S., the plight of the American Indian, on reservations, high alcoholism, education access etc.  In all three countries, we sing our national anthems proudly, but our countries are established on the “original sin” of taking the land away from those who were our countrie’s first inhabitants. It is a fact of our histories. This recent trip gave me much food for thought concerning history and indigenous peoples.