O ye daughters and sons of liberty,
these stairs do creak
neath the weight of history’s tale.

Gather ye now and every year,
honor patriots of battles past
and those who hero now.

Raising voices strong
in songs of country’s pride,
our enduring land of liberty.

A “folk poem” for dVerse. Written April 18, 2016, exactly 241 years after the occasion immortalized in Henry Wadsworth Longfellow’s poem, The Midnight Ride of Paul Revere. The Lantern Ceremony has been held for the past 139 years at Boston’s Old North Church, an active Episcopal congregation to this day.  Paul Revere was a member and arranged for the sexton Robert Newman and vestryman, Captain John Pulling Jr., to climb the steeple stairs pictured here and signal with two lanterns, if the British were approaching by the Charles River. This sparked Paul Revere’s infamous ride to warn militia and ultimately, the first shots of the American Revolution. Also counting as NaPoWriMo Day 19.

Photos: my spouse climbing the steeple’s stairs at Old North. We are fortunate to be members of this historical church and attended the April 18, 2016 Lantern Ceremony: fife and drum corps, historical reenactment, recitation of Longfellow’s poem, a featured speaker, lighting of two lanterns at the altar. The lanterns are then processed through the church and carried up the steeple as they were that night. The ceremony concludes with the singing of America and America the Beautiful. I can truly say it is a magnificent evening — for me, more moving and inspirational than the 4th of July. And I love the 4th of July! If you’re ever in Boston on April 18th, I urge you to get tickets in advance and attend! Last photo is taken from Copps Hill after the ceremony last week.

Videos: Both from the 2015 ceremony — they are always similar except for the featured speaker and those honored to be the lantern bearers up the steeple.  The first is from outside the church.  The second (church is lit by candlelight and this is an amateur video so it is somewhat dark) shows the rousing conclusion of the ceremony — with just the first verse of America — all verses are sung. 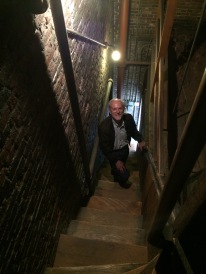 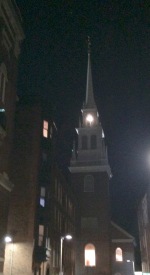 Join 1,870 other followers
Follow lillian the home poet on WordPress.com